A Disney Star Wars Itinerary for Your Day At Hollywood Studios 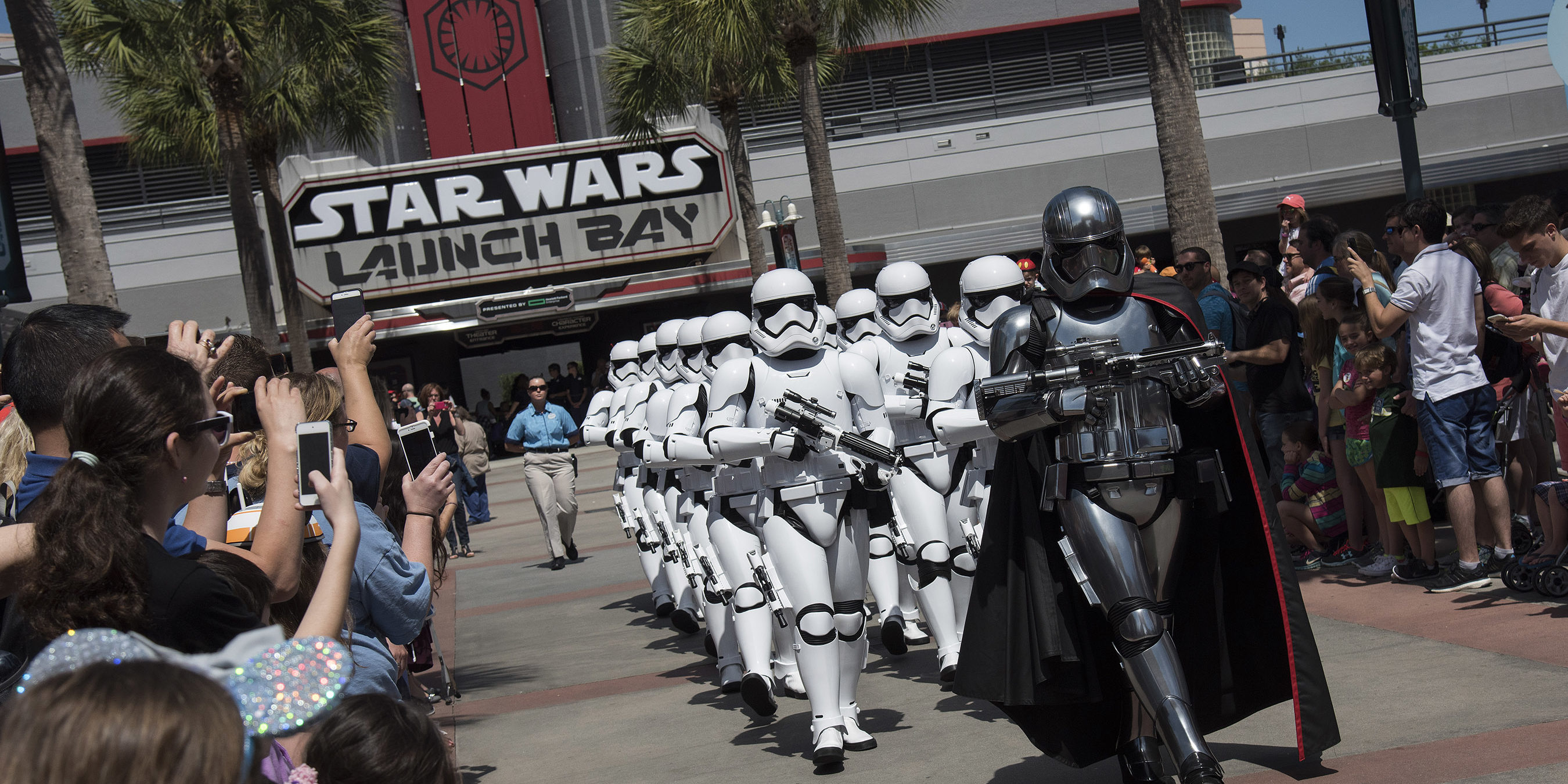 There currently is only one Star Wars ride in Hollywood Studios, so make sure that you include Star Tours in your Fastpass+ selections. Once Star Wars Land (Galaxy’s Edge) opens up, there will be a couple of more options, but for now, Star Tours will be your “must-do” ride for the day to add to your Disney Star Wars itinerary.

If you have children and they are also in to Star Wars, then you will want to get them signed up for Jedi Training. They’ll get to battle Kylo Ren on stage and it is a pretty cool experience. This experience is for children between the ages of 4 and 12. If this is something you want to do, then you will have to get to the park for rope drop. Aim to be at the gates of the park at least a half hour before it opens. The earlier you get there, the closer you will be in line at the gates.

Once the gates open, you will want to head straight to the registration area for Jedi Training, since this experience fills up QUICK! You register at the Indiana Jones Adventure Outpost between Indiana Jones Epic Stunt Spectacular and the 50’s Prime Time Cafe. Make sure to pick up a map before you head in to the park so you know exactly where you need to go. I’ve indicated on the map below exactly where you need to go: 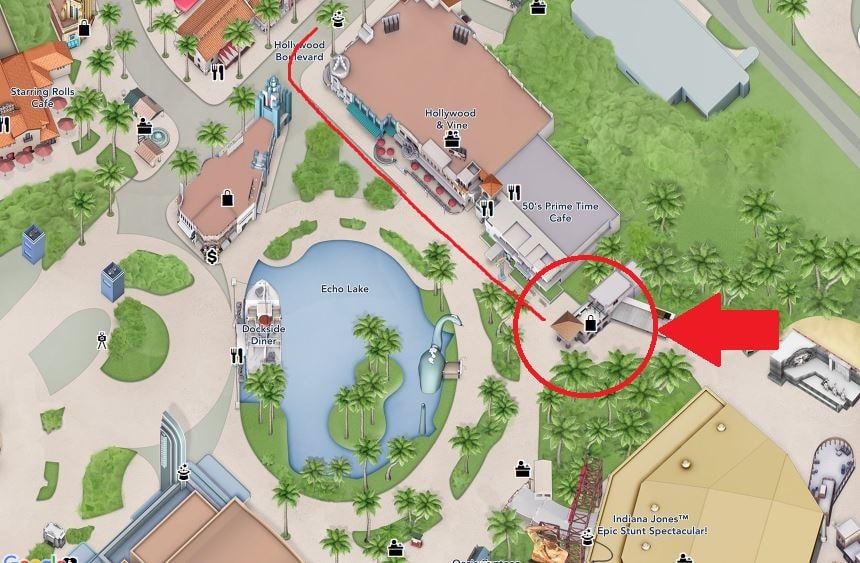 Once you’ve got Jedi Training registration out of the way, I recommend heading over to the Star Wars Launch Bay to meet some characters. It can get a bit busy in there later in the day, so best to head over and get it done early. You can meet Chewbacca, Kylo Ren and BB-8. You’ll also get the chance to see some pretty cool Star Wars memorabilia on display and before you enter the Launch Bay, you have the opportunity to view a short movie. Take it all in!

Before the strong heat hits in the afternoon, you may want to take the opportunity to view the March of the First Order and the stage show Star Wars: A Galaxy Far, Far Away. Make sure to check your Times Guide or My Disney Experience app to see the times that the First Order marches down Hollywood Boulevard. You don’t really need to get there too early, about 5-10 minutes beforehand is okay. The best spot to stand for the March is right at the end of Hollywood Boulevard, in front of the store Keystone Clothiers. That is the spot where they stop and Captain Phasma stops and interacts a bit with the crowd. Be sure to be right on the edge of the sidewalk so you can have a front row seat: 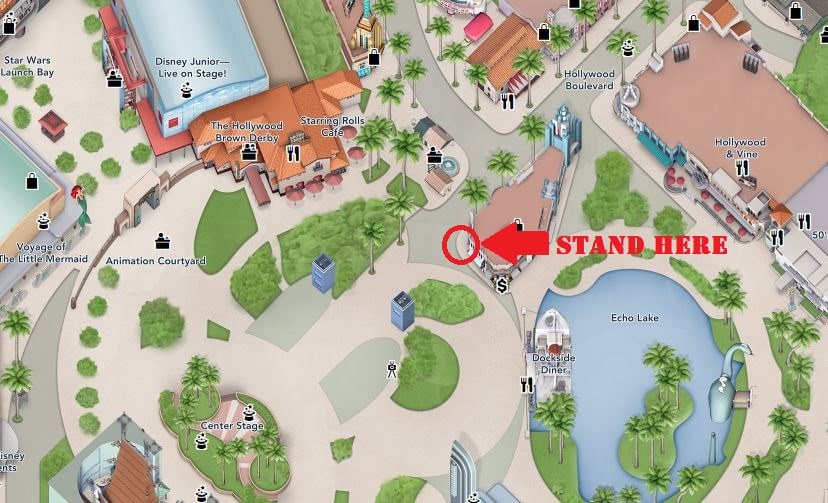 Once the March is over, move on up towards the stage in front of the Chinese Theatre as the Star Wars: A Galaxy Far, Far Away show is usually right after the March.

There are two quick-service restaurants near the Star Tours ride that often have some Star Wars themed desserts you can choose from. They are Backlot Express and ABC Commissary. Both have some decent selections for lunch and if you have the My Disney Experience app on your phone, you could use the Mobile Food Ordering option to avoid waiting in lines.

After riding Star Tours, you will exit in to the Star Wars merchandise store. This is where you can stock up on some Star Wars souvenirs. They have stations where you can even build your own droid or light saber. They have some pretty cool stuff in there, so make sure to take your time and look around.

When you exit the store, stop and enjoy a cool photo opportunity on a Speeder Bike. Sometimes there is a Photopass photographer there, but if not, make sure to get one with your own camera. It’s a really cute shot! 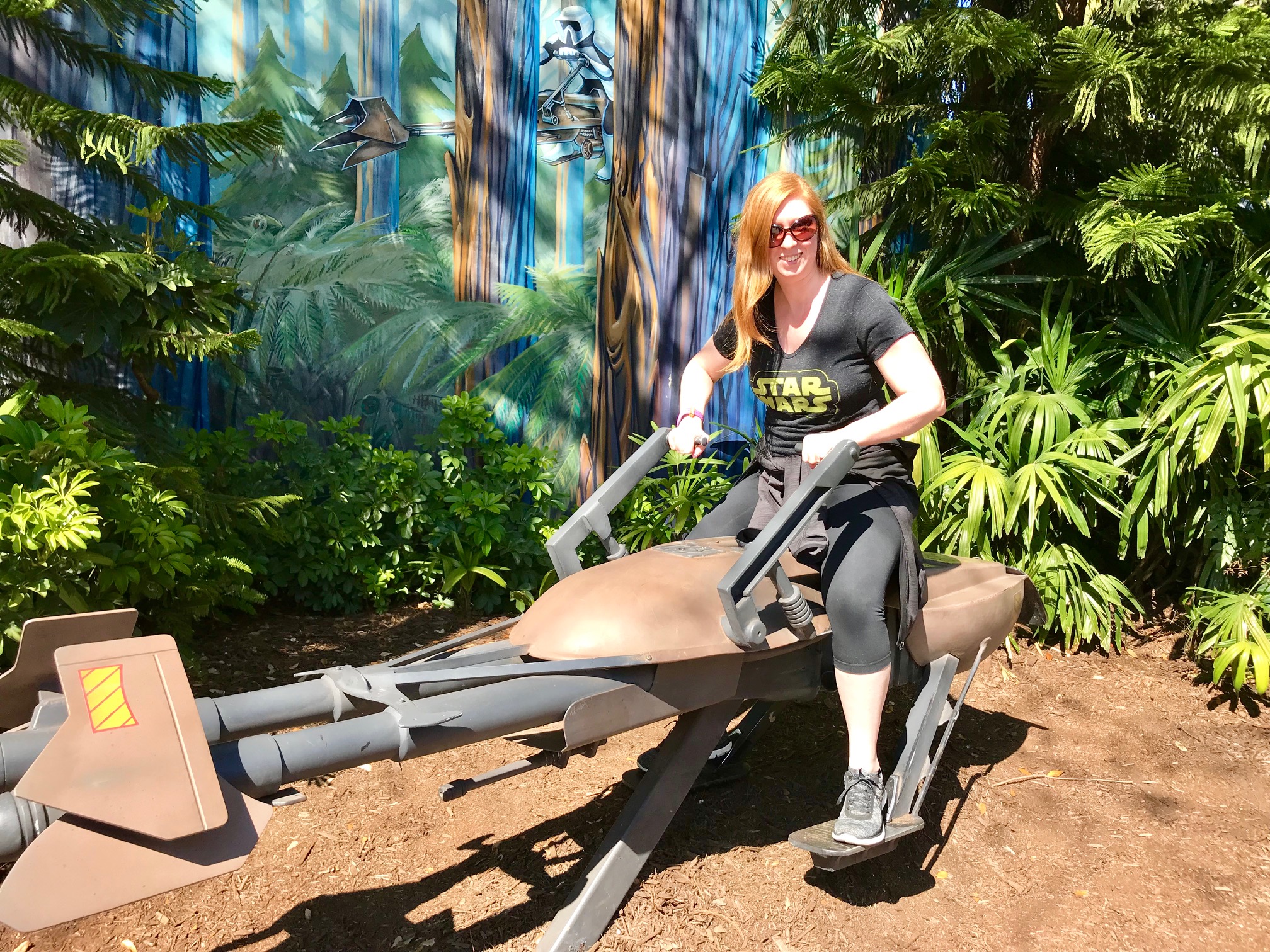 After that, you could head down Grand Avenue to take a look at the future entrance of Star Wars Land. It’s a fun photo opportunity and sometimes they have Photopass photographers stationed there.

You’ll then want to head over to the Echo Lake area to catch a showing of Star Wars: Path of the Jedi. It’s an entertaining film for any Star Wars fan that shows footage from some of the most recent Star Wars films.

This would be a good time to go back and take a break at your hotel, unless you would like to stay and explore the other attractions in the park. The last Star Wars themed event to see will be at the end of the day.

You will want to make sure you head back to Hollywood Studios for the evening showing of Star Wars: A Galactic Spectacular. This is one of the best projection, laser and fireworks shows I have seen. A true Star Wars fan will absolutely love it!

If you would like to add a special experience to your evening, then consider booking in advance the Star Wars Dessert Party. The dessert party gives you access to a special buffet of desserts and beverages beforehand in the Launch Bay. You’ll be treated to some delectable savory and sweet options, along with some beverages (alcoholic and non-alcoholic). It is all you can eat, so you can really fill up at the party. You can also go and meet the characters a second time if you’d like during the party. Wait times do tend to be a bit lower during this period.

Once the party is over, you will be escorted to a special roped off area to view the fireworks. It really is the best viewing location and it will be unobstructed because the way they rope it off, no one is standing directly in front of that area. My tip is to actually head out to the area about 15 minutes before they announce it in the party. That way, you can be certain that you will have a spot at the front of the rope. Best view by far!!!

As part of the party, you should also receive a souvenir, so make sure to get that before you leave the Launch Bay area. When we went, they were giving out the Tie Fighter popcorn buckets, but I believe the souvenirs change, so you may get something different.

Will you be focusing a lot on Star Wars on your next Disney vacation or are you waiting for Galaxy’s Edge to open until you make a visit to Hollywood Studios? Tell us your plans in the comments! 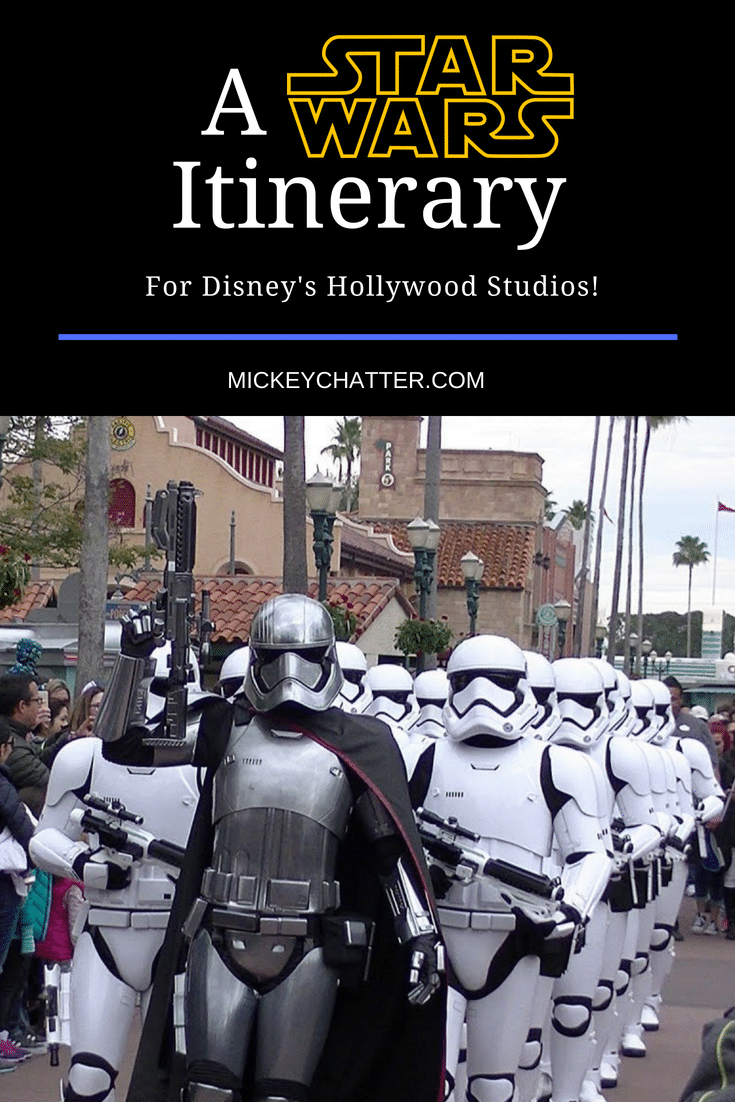 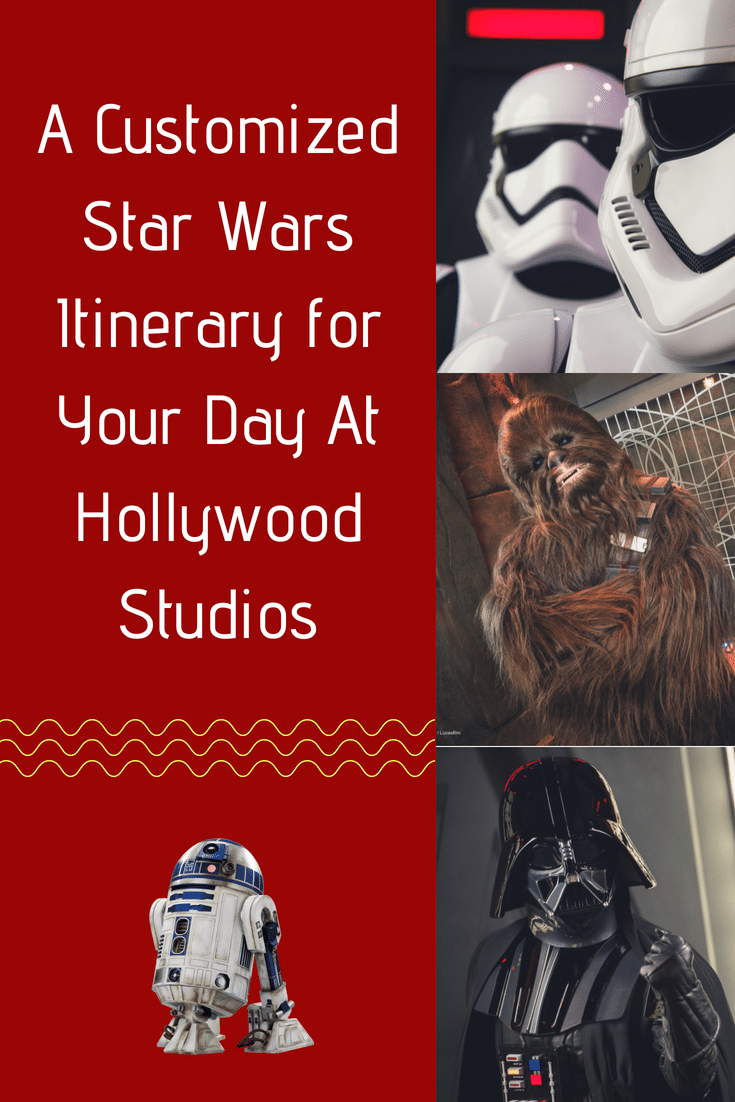